A GENTLE DESIGNER GOES ‘AROUND THE WORLD’

When José Manuel Ferrero founded the Design Atelier estudi{H}ac in 2003, he had in mind to give life to all the ideas that would arise in his head; an ambitious goal, given its great creativity, which in the course of 17 years of experience, as national and international projects as awards,  thanks to a team of industrial product designers, interior designers and architects, from this atelier of design in Valencia, has led to the development of projects’ positioning the estudi{H}ac at the center of the national and international design panorama.

Discreet, elegant, smart and of refined creativity, the first impression of estudi{H}ac is that of a great passion for always creating new tailor concepts and fresh visions for design products, interior projects and temporary spaces following the studio’s philosophy that is: designing for visionary clients who are looking for a personalized elegance conceived as a lifestyle by José Manuel Ferrero. The same elegance is found in the Design Atelier brand book presenting with extraordinary graphic energy the most recent projects through a timely and fascinating description of an experienced reality made of objects, spaces, decorations and tools. Each project is a story tailor-made for the customer.

The Mediterranean creative soul finds an opportune and powerful counterpart in the English one, acquired by Ferrero in an almost magic way during his stays in London; a world opposite and complementary to the chromatic energy of Spain with warm and sunny tones, among which the beloved green color stands out as a sign of hope and serenity.

For Ferrero the shop windows of Savile Row, especially the workshops where the ritual of haute couture is celebrated and his great admiration to Paul Smith, became a representation, almost a stylized ballet of precision, seriousness, reliability of the British world as opposed to the passionate imagination of the Mediterranean soul, also perceived from the experience lived in the study of Óscar Tusquets.

The idea of personifying what is English in a literary figure resulted in the identification with Phileas Fogg, the character created by Jules Verne to represent with a look from the outside, such as the look of Josè Manuel Ferrero, the sought-after and desired idealization of the British genius. Furthermore, there is the world of his creations which range from the design of furniture and objects to the furnishing of restaurants, along a path always faithful to a passion that is both intense and ironic and lives on the wealth generated by the crossing of two cultures. 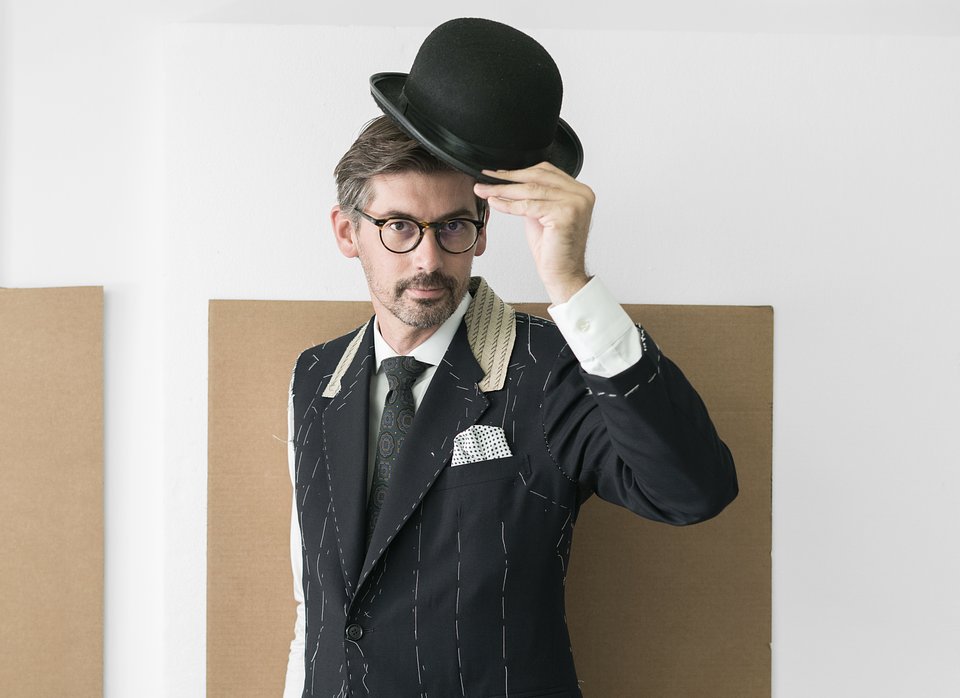 estudi{H}ac jmferrero deals mainly with product design, but it is also active in retail, hospitality and exhibition projects. Its creations reflect José Manuel Ferrero’s approach and his role of designer, or better of 'Gentleman Designer’ combining once again imagination and linearity: this approach includes briefings, design paths shared with the clients, the commitment to understand their nature being able to interpret their needs and interact with them. The studio’s customers are renowned brands of design furniture, but also young companies in love with the ideas arising from the dialogue with objects and projects.

Just like Phileas Fogg, Josè Manuel Ferrero travels around the world finding creative resources and material solutions that allow a circular journey and the search for an outcome that, as in Fogg's bet, must lead to satisfaction, to success and to a concrete gain without forgetting the ever-present commitment to sustainability. In Ferrero’s vision, sustainability means durability and length of the life cycle of quality products whilst recyclability is an issue from the very first steps of the project.

Designing furniture for food spaces is a true challenge where one plays on ethnicity and genius loci, but also on its opposite, a sense of alienation generated by de-contextualized spaces giving in to the charm of local suggestions and pleasant gastronomic vertigo as well.

An exciting journey full of surprises will allow to discover the universe of Josè Manuel Ferrero and estudi{H}ac. It will be like traveling around the world through the names of prestigious clients, projects, spaces and products that are unique, timeless, never the same, where colors and materials keep simple and strong forms. A journey capable to represent, in more than many words, the world full of contrasts and emotions created by the subtle ironic attitude of José Manuel Ferrero.

estudi{H}ac boasts honest relationships in a constant synergy of ideas with the client and this is precisely the key to understand the philosophy of the studio. As the silent ‘H’ in Spanish is not requested for pronunciation but it is fundamental for the meaning so the linear and discreet style of Jose Manuel Ferrero works responds to a need of simplicity and purity alongside an emotional involvement that makes the difference and gives a touch of transgression and surprise making each project elegant, dynamic and vibrant.

by José Manuel Ferrero
Powered by